The unique sound of the Japanese taishōgoto (大正琴), or Nagoya harp, in a convenient Kontakt Library. The taishōgoto is a Japanese stringed instrument. Requires the full version of Kontakt (version 5.3.1 or later).

The taishōgoto (大正琴), or Nagoya harp, is a Japanese stringed musical instrument. The name derives from the Taishō period (1912–1926) when the instrument first appeared. It has also become naturalized in East Africa, often under the name Taishokoto.

The Taishōgoto was developed in 1912 by the musician Gorō Morita in Nagoya. He had received a scholarship from the first prime minister of Japan to study music instruments in Europe and the United States for two years. He subsequently came up with the idea of combining the mechanics of a typewriter with an instrument.

The taishōgoto bears a close resemblance to the bulbul tarang from India, and the akkordolia from Germany, all sharing the same principle of using keys to press down on strings to change their pitch. It also bears some resemblance to the Swedish nyckelharpa for the same reason although the action and the method of playing the strings is very different.

The taishōgoto consists of a long, hollow box with strings running its length. Above the strings are a span of numbered typewriter-like keys, which when depressed fret or shorten the strings to raise their pitch. It is played lengthwise and strummed. There are also electrified versions of the instrument. 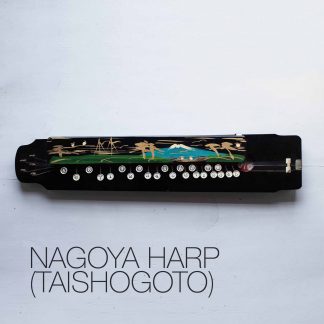