In the mid 1920s, the US went through the first of several Hawaii crazes. Tourists flocked to the islands, coming home with ukuleles that they’d purchased while on vacation. There was even a hit song called Ukulele Lady. Part of this fad was that instrument makers started slapping the word ukulele onto any old instrument that they happened to be trying to sell. Instruments like the Ukelin – which was billed as a cross between a Ukulele and a Violin. The ukulele influence is very light. In reality it’s a lot more like a fretless zither, except that you play it with a small violin bow. Of course, it’s not really like a violin either. Instead of pushing your fingers down on a fingerboard, you actually get a different string for each note. In addition to the 15 note strings, there are also 16 strings arranged in four chords. 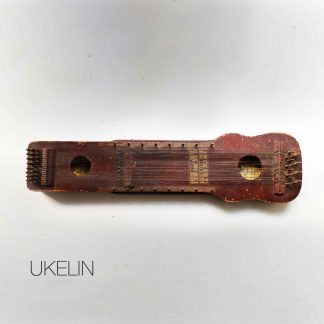