All proceeds from the sale of this sample will go to Black Lives Matter / Community Bail Funds for protestors.

A few years ago, Dave Hilowitz had a pretty intense fretless zither phase. He was working on a podcast episode about these instruments, and he kind of went overboard, buying no less than six instruments to use in the episode. The harp we’ve sampled here, the Phonoharp No. 2, was purchased at a flea market in Philly and was the first instrument he bought (the one that kicked off his obsession). It was made in the early 20th century by the Phonoharp Company of Boston. What differentiated this zither from its competitors was that it had a grill on the top that allowed you to play three chords. The chord functionality sounded terrible, so we took the grill off in order to sample it better.

A zither is a kind of harp that lies flat on a table; one plays it by plucking its strings with a pick. The traditional kind of zither, a sort that was crafted in Germany in the mid-19th century, was very fancy, had several sets of strings and a fretboard, and was very difficult to play. By the late 19th century, a simpler version without the fretboard was being mass-produced both in Germany and in the US by German immigrants. They were sold door-to-door and in catalogs, a came with song cards that showed how to play popular songs of the day. Today, this second class of instruments is referred to as “Fretless Zithers.” 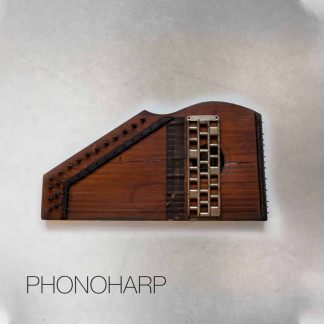